Bitcoin (BTC) is on the verge of seeing broader acceptance, Elon Musk, the CEO of Tesla, said in a Clubhouse conversation on Feb. 1.

Clubhouse is an exclusive audio chat social media platform that is invite-only. Members can join various conversations, akin to an online private conference.

“I am late to the party but I am a supporter of #Bitcoin.” – Elon Musk

During the conversation with Andressen Horowitz and other prominent investors, Musk was asked about his thoughts on Bitcoin.

After the occurrence, Bitcoin investors and enthusiasts were highly anticipating positive comments about crypto, in general, from Musk.

When asked about Bitcoin, Musk said according to industry executives who were able to listen to the chat:

“One of the most forward thinking inventors of our age missed bitcoin. On Clubhouse just now, @elonmusk tells of a friend who gave him a cake in the shape of a bitcoin back in 2013. Despite being ‘late to the party’ Elon thinks bitcoin is on the verge of acceptance in finance.”

Dan Tapiero, a partner at 10T Holdings, shared a similar sentiment. He said that the richest man in the world being a Bitcoin supporter “feels good.” Tapiero wrote:

“Somehow it feels good that @elonmusk , a #Bitcoin supporter near my age is the richest man in the world. Was getting tired of Gates/Buffett/Bezos…older guys in old tech or no tech and not bitcoiners. With an iconoclast and a visionary as example maybe there is hope for Gen Z.”

As Cointelegraph reported, prominent Bitcoin investors such as billionaire Tim Draper have been asking Musk and his businesses such as Tesla to accept BTC directly, which would give Bitcoin a massive boost in global awareness.

So why did Bitcoin drop instead?

The price of Bitcoin pulled back by around 3% immediately after Musk commented about the dominant cryptocurrency. 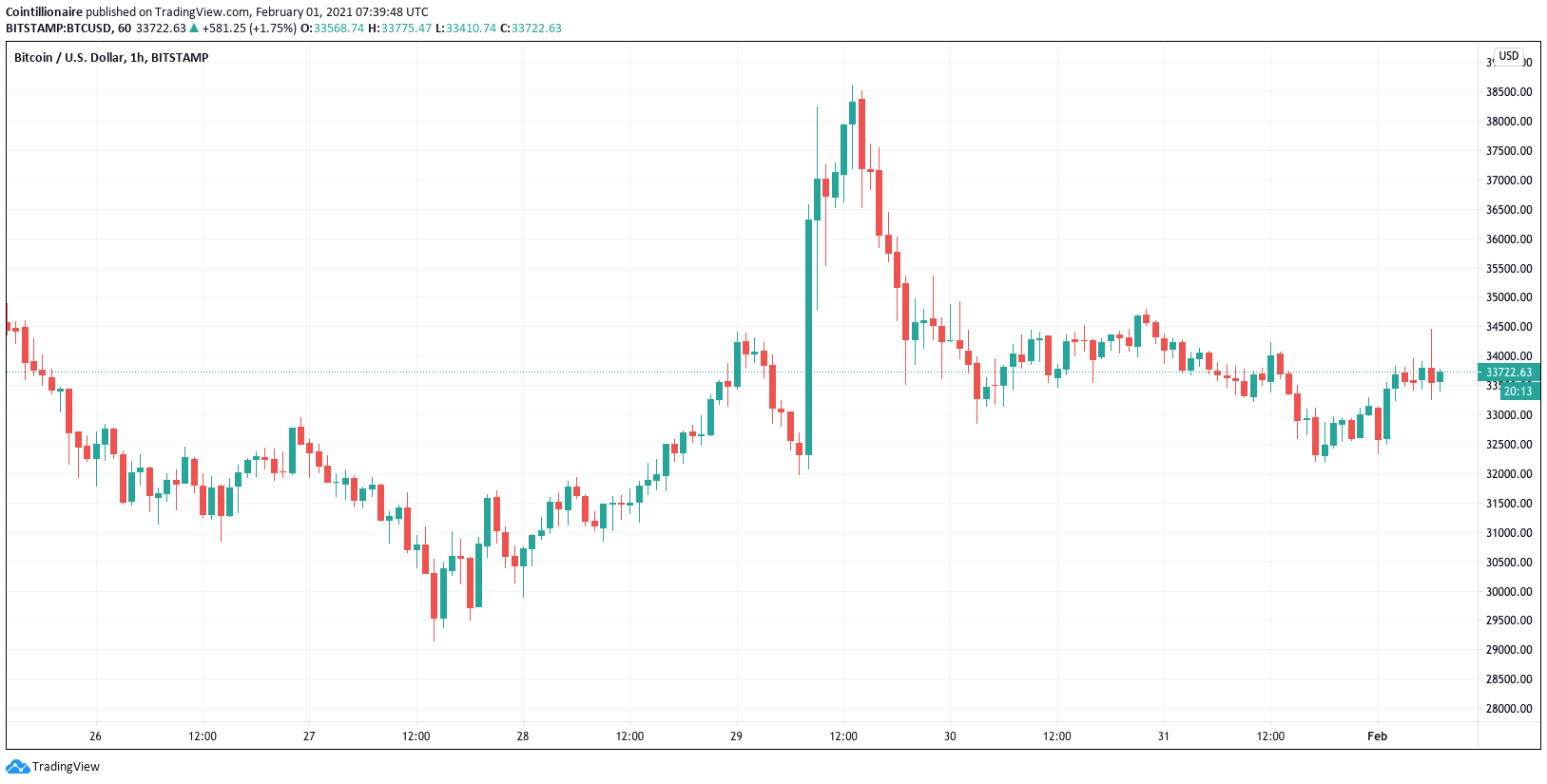 There are two reasons why the price of Bitcoin might have dropped after Elon talked about Bitcoin. First, some may have anticipated Musk to disclose his Bitcoin holdings.

Second, the market might have reacted with a sell-the-news response, as the minor pullback occurred merely minutes after Musk’s comments were publicized.

As Cointelegraph reported, the price of Bitcoin has been showing weakness since the “Elon pump” to $38,000 on Friday. Traders are now closely watching technical resistance at $34,500 and $35,000 that must be broken to avoid more downside in the short term.